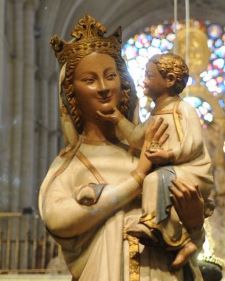 An Urgent Appeal to Resist the Betrayal and Ruin of the West, Flower of Christian Civilization

The triple crisis of COVID-19, civil unrest, and economic disaster is now shaking the West’s spiritual and material foundations and the world. This is no ordinary crisis since it questions our time-worn certainties, changes our daily lives, and restricts Church freedom. In the face of this crisis, many are stunned and wonder what went wrong. Where is the West headed? Is it possible to avoid the approaching chaos?

Amidst the West’s great peril, as lay Catholics who have long defended Christian civilization against the errors of communism and socialism, the Canadian Society for the Defence of Christian Civilization and its autonomous sister organizations on five continents throughout the world, offer you their analysis of the danger and their message of hopeful restoration.

The current crisis manifests itself in multiple ways. However, all of them present a unity of purpose that aims to destroy Western Christian civilization’s remaining structures. We might divide them into three major categories.

The world is dealing with a viral epidemic whose origin and spread point suspiciously to China. This virus has affected, above all, the Christian nations of Europe and the Americas, in both its serious health risks and the profound economic, social, and psychological impact of the draconian health and lockdown measures.

The so-called new normal is also affecting the lives of hundreds of millions by restricting freedom of movement, interrupting work and education, banning or limiting gatherings and cultural events, and, finally, restricting access to Sunday Mass and the Sacraments.

People are told to get used to a world of sadness, isolation, and sub consumerism controlled by technocrats, not unlike the dystopian nightmare in George Orwell’s 1984 novel.

With massive political, social, cultural, and psychological consequences, a serious economic crisis knocks at the door. World-class analysts predict it will be much worse than the Great Depression that started in 1929.

The pandemic revealed the West’s monumental economic dependence—the rotten fruit of the reckless offshoring of its manufacturing base, above all, to China.

The result is a great political weakness in the West. It finds itself much degraded in a “multipolar” world in which Communist China is taking on the role of a dragon. Many authors denounce the gradual and inevitable decline of the West’s political, military, and diplomatic power on the international stage. The world, as we knew it, seems to be ending.

The West is weakened by focal points of unrest that have arisen simultaneously worldwide as if triggered by a common direction. These points include:

A consequence of the unrest is that it leads to a radicalism that, with help from the media, frightens and paralyzes the silent majority. In countries where the majority reacts, the consequent ideological polarization leads to a paralysis of the democratic institutions, and many voices even mention the risk of civil war.

The West is unprepared to face this triple crisis. Its foundations are eroded by the terrible structural weakness of a massive cultural revolution as seen, for example, with the crisis in the family, the culture of death represented by procured abortion, and an aggressive LGBT ideology imposing itself on all society, even innocent children.

Above all, the West is weakened by a spiritual crisis. Untold numbers abandon the Faith and live without God or His Law, no longer seeking God’s grace and sacramental life. Our moral decadence has weakened us, and we have forgotten our Christian roots.

Deprived of spiritual and social support, many people’s reaction to our triple crisis is disbelief and shock. Many psychologists call it a “collective trauma.” Powerful, solid, technologically perfect, and self-assured, our world was shaken to its foundations by a novel coronavirus.

In a few months, together with the Western economy, many certainties collapsed. These certainties had fuelled the optimism of the masses in indefinite progress. Today, the crisis has eroded confidence in the media, science, political authorities, and even religious leaders.

Optimism, the characteristic feature of our time, is disappearing. The optimism that two world wars could not shake is fading, leading to growing anxiety for the future.

Within this apprehensive context, many begin to question the West’s premises. They ask: What went wrong? Is there a solution? Is there a light that can guide us during this storm, comforting us and restoring confidence in the future?

These questions carry the seed of remorse and a distant longing for the abandoned path of virtue.

Amidst the crisis, we would do well to repair to the wellspring of Christian culture to rediscover the spiritual values that made us. From this spiritual source come the Christian order, institutions, and graces that will lead us out of the present triple crisis. Only such a return of prodigals to the Father’s house can regenerate society on the scale and scope that is needed.

However, our inability to deal with the triple crisis stems from the fact that a parallel crisis within the Church undermines our certainties, principles, and values. This spiritual crisis is far more destructive since it deprives us of the means that help us find solutions.

In this supreme hour of Christianity, the faithful would naturally lift their gaze to the Chair of Peter, the Supreme Authority of the Catholic Church, seeking a word of comfort and guidance. Instead of being the West’s bulwark, however, the Holy See seems indifferent to its fate. At times it even seems to favour those attacking the West with unparalleled intensity. The West’s immense spiritual orphanhood is the current situation’s most terrible aspect.

Consider these recent facts (among many that could be listed) that undermine the foundations of the Faith:

The Catholic Church is universal—its name says it. Its mission is to baptize all nations, teaching them to observe what Christ commanded (See Matt. 28:19–20). In that sense, it does not identify with this or that geographical area, ethnicity, or culture. However, during these two thousand years, Western Christian civilization has been the most visible and enduring fruit of the Church’s apostolate. Its holiness, evangelizing spirit, philosophical and theological depth, hospitals, universities, works of charity, economic vigour, and flourishing effects in the arts and sciences led Pope Leo XIII to write: “There was a time when the philosophy of the Gospel governed the states” (encyclical Immortale Dei, no. 28).

Until Pope Francis, the Sovereign Pontiffs recognized Western Christian civilization as the Church’s firstborn daughter and sought to defend it. What an unnatural Mother the Church would be if, in a situation in which this eldest child is in the danger of dying, She would turn Her back or, worse still, help Her enemies attack this firstborn until she perished! The Church would be acting like a false shepherd who turns the flock over to the voracious wolves wanting to devour it. However, this is the attitude shown by many of our highest ecclesiastical authorities.

In the face of this apocalyptic scenario, a piercing question wells up in the souls of innumerable Catholics: Is it lawful to react and proudly defend Christian civilization, its religious and temporal traditions, even when this implies opposing certain guidelines issued by these high authorities? Is it lawful to resist, to the fullest extent permitted by Canon Law, the policies pursued by Pope Francis that threaten the West’s integrity, security, and cultural identities?

We are not afraid to assume this state of resistance because its moral licitness was implicitly acknowledged by the silence of Pope Paul VI and numerous other ecclesiastical authorities to the TFP statement on the Vatican’s policy of détente with communist regimes. The 1974 document, written by Prof. Plinio Corrêa de Oliveira, was signed and published by all TFPs then existing. In it, we read:

In this filial act, we say to the Pastor of Pastors: Our soul is yours, our life is yours. Order us to do whatever you wish. Only do not order us to do nothing in the face of the assailing Red wolf. To this, our conscience is opposed.

Yes, Holy Father, Saint Peter teaches us that it is necessary “to obey God rather than men” (Acts 5:29). You are assisted by the Holy Ghost and supported—under the conditions defined by Vatican I—by the privilege of infallibility. But this does not mean that in certain matters or circumstances the weakness to which all men are subject cannot influence and even determine your conduct. One of these fields where your action is subject to error—perhaps par excellence—is diplomacy. And this is precisely where your policy of détente with the communist governments is situated.

What, then, should we do? The limits of this declaration do not permit us to list all the Church Fathers, Doctors, moralists, and canonists—many of them raised to the honor of the altar—who have affirmed the legitimacy of resistance. This genre of resistance is not separation, it is not revolt, it is not acrimony, it is not irreverence. On the contrary, it is fidelity, it is union, it is love, it is submission.

To resist means that we will encourage Catholics to reaffirm their love for Western Christian civilization and their willingness to defend its remnants and culture. Furthermore, we will promote their restoration with greater brilliance and solidity, so the West regains the world leadership it deserves not because it is Western but because it is Catholic. Western Christian civilization builds on a bimillennial past and the fact that it has Rome, the See of Peter, at its centre.

To resist means to invite Western leaders and peoples to study the deep reasons for their decline, as analysed in Revolution and Counter-Revolution, Prof. Plinio Corrêa de Oliveira’s masterpiece, and implement the remedies it suggests to extricate the West from this existential crisis.

To resist means that the West’s demise is not a foregone conclusion for as we are reminded by the late Brazilian Catholic leader in that same book: “When men resolve to cooperate with the grace of God, the marvels of history are worked: the conversion of the Roman Empire; the formation of the Middle Ages; the reconquest of Spain, starting from Covadonga; all the events that result from the great resurrections of soul of which peoples are also capable. These resurrections are invincible, because nothing can defeat a people that is virtuous and truly loves God.”

To resist means to respectfully publish our analysis and judgment in situations such as the encyclical Fratelli Tutti or Pope Francis’s endorsement of the legal recognition of homosexual unions—a death blow to what remains of Western Christian civilization.

To resist means to denounce with filial and respectful frankness the dangerous contradiction between the privileged treatment accorded by the Holy See to Red China (whose communist regime it does not condemn) and Pope Francis’s disdain for the great countries of Europe and the Americas, for he mercilessly attacks their sovereignties and economic system based on free enterprise and private property. Nevertheless, this system is broadly aligned with natural law, the Ten Commandments, and the popes’ bimillennial teaching, as found in the Supreme Magisterium of Holy Mother Church.

To resist means to proclaim with indomitable confidence that beyond the spiritual storms, material challenges, and every attack by their enemies, the West and Christian civilization will rise again, fulfilling Our Lady’s prophetic words in Fatima, “finally, my Immaculate Heart will triumph!”