The First Rosary Rally Captain Wants You To Join Him 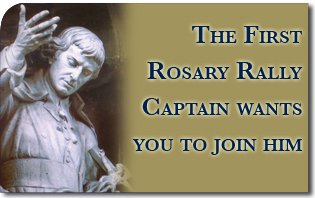 Around the turn of the eighteenth century in Rennes, France, a family named D’Orvilles presented a problem to Saint Louis de Montfort.

Mr. D’Orvilles complained to Saint Louis de Montfort that his house adjoined the city square where much sin and immorality took place. He said young people would come there at odd hours, sin and make so much noise that they would distract those in his household during the Rosary.

He asked the saint, “What can be done about this?”

“Make a niche in the façade of the wall that overlooks the square,” replied Saint Louis de Montfort. “Put a statue of Our Lady there, and pray the Rosary in front of her.”

“In the public square right in front of the image of Our Lady,” instructed the saint.

The day following the completion of the niche, Mr. D’Orvilles, his family and all the servants from his household, prayed the Rosary in the public square. His wife lead the mysteries while he stood guard with a whip to keep the aggressions of young hoodlums at bay.

While praying, many carriages went through the public square, and some friends even called out to him inviting him and his wife to party. At first he was tempted to hide his Rosary beads in his hand, but he conquered himself and held the Rosary high so that all could see that he was at prayer.

A strange thing happened. After saying the Rosary daily for some time, the public square Rosary became a curious attraction.

People came in crowds to pray, as if some great church ceremony were taking place, and soon, the disorders in the square ceased.*

Much of what happened in Rennes, France, is happening in Canada today.

The response to the Public Square Rosary Rally has been excellent. For the next one, on October 10, 2020, our goal is to have 700 Rallies praying the Rosary in public, because every city in Canada and the world is in need of conversion.

Our Lady revealed at Fatima that God wishes to establish devotion to the Immaculate Heart of Mary as the solution for the world’s sins and impurity.

I’m inviting you to give public testimony to our divine faith and become a Rally Captain for Our Lady and to pledge yourself to her and the “Divine solution.”

This story of the D’Orvilles family is one of many examples where the power of the Rosary helped to transform society. You can do the same, and it’s easy. Just take your Rosary, the banner we will send you, and then stand in a public spot on October 10, 2020 with family and friends and pray. It’s that easy!

When you decide to become a Rally Captain, and I pray you do, simply go to https://canadaneedsourlady.org/public-square-rosary-rally/ and sign up on our Rosary Rally page devoted solely to receiving your pledge to Our Lady.

On the Web site, you’ll find more details and how we’ll help you have a successful, easy and fulfilling Public Square Rosary Rally on October 10, 2020. As a Rally Captain we will take a red rose to Fatima on your behalf in October. This is a small way to show our appreciation to you for becoming a Rosary Rally Captain by helping spread devotion to Our Lady each year.

Together we can repeat history for the sake of Canada and help bring on the Triumph of Mary’s Immaculate Heart!

Thank you, and may God bless you!